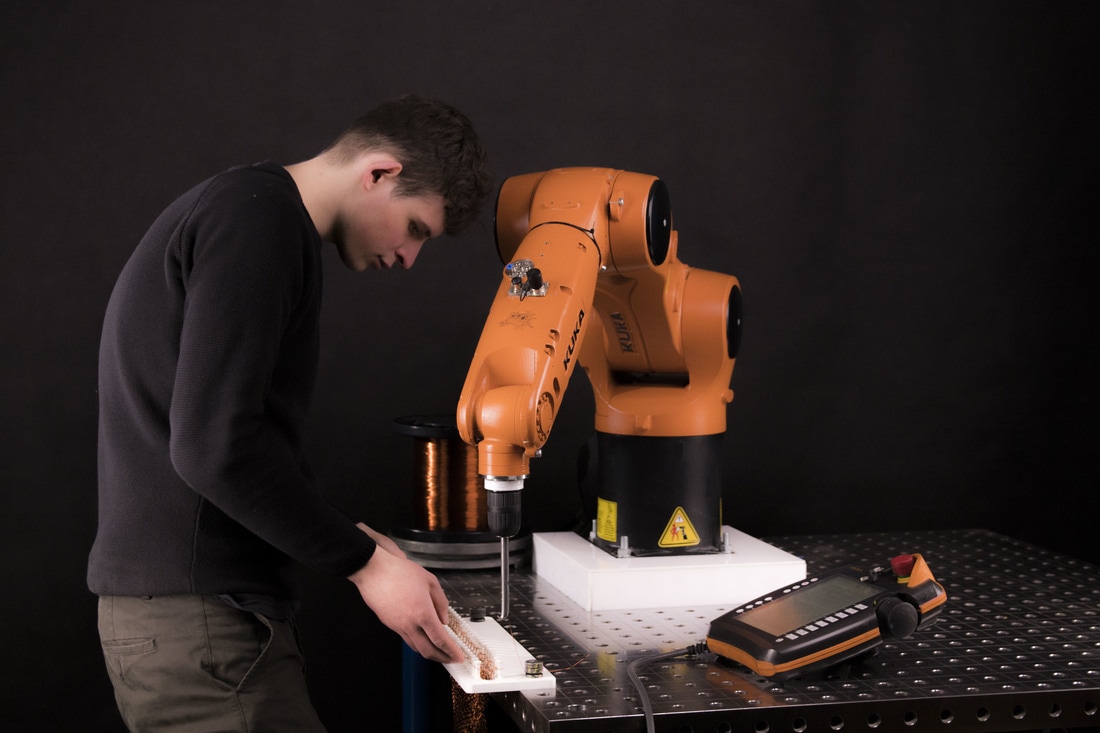 Can we knit the future?
​ 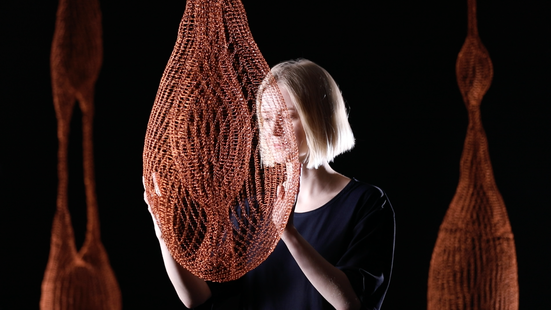 We used Kuka robot to knit copper wire structures,
Knit fabric is currently used to cover and conceal, finding application mainly in fashion and upholstery. We believe that its applicability is much broader, so using it only as an external cover does not fully exploit its properties. The fabric is constructed from a single thread that can be made of almost any material. The process itself is continuous and endless, so the fabric can always be extended or unraveled. The knit fabric is soft, without any harsh edges, its form encouraging touch – and interaction. The Knotty project shows that we can construct our world not from blocks or bricks, but knots and lines. Knit fabric and new technologies allow us to combine what is human with what is natural, bearing in mind that this artificially created dichotomy is only an illusion.
​
Learn more about wire knit 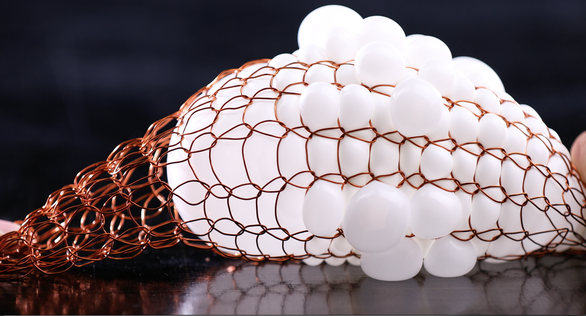 Although the knitting comes out flat from the loom - making it easier to store and transport,
its then formed with  balloons and air pressure taking advantage of volumetric expansion .
expanded knit holds it shape, allowing creation of 3d structures.
take a look

What if?
​your surrounding feels you?

Knotty structures, in a sense, know when you touch them,
using a capacity and light - knotty installation communicates an idea of interactive surroundings.
learn about capacity 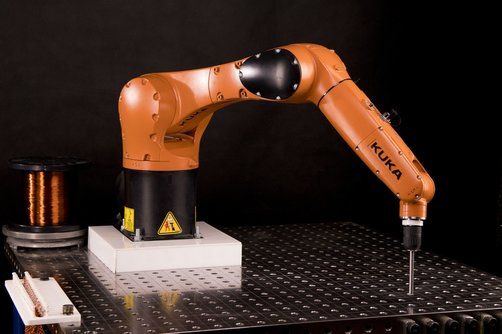 Advancing robotization enables employing new materials and working on various scales. As a designer’s tool, the robot impacts their work and their way of thinking about design. To program a robot is to design movement. It opens new geometries in designer’s thinking; the designer is no longer limited by technical drawings and the logic of projection that must fit on the sheet of paper. Movement in space becomes the material itself, and the knit fabric is a precise record of this movement. Each loop is a trace of a gesture performed either by a human hand or by a robot. The fabric is being created in the process-time, and the language seems to reflect that quality: the material materializes before our eyes. 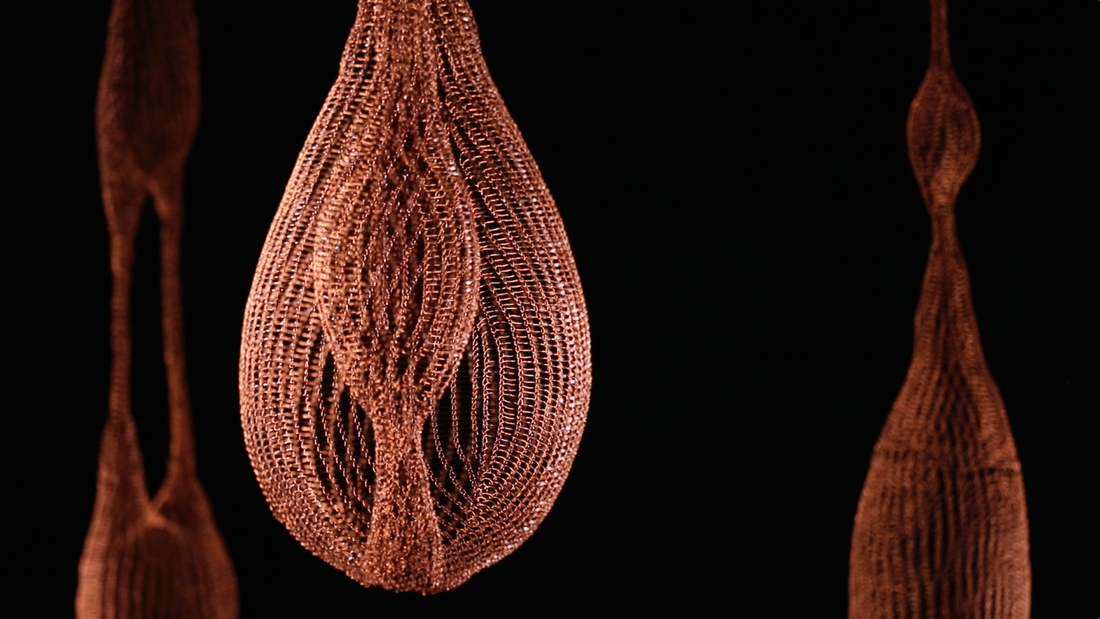 ​We imagine the future in which our surroundings continuously detect our presence and react to it. Buildings no longer need windows and doors, but like a living organism, they have cavities and orifices that open when necessary. We imagine bridges and passages between buildings that robots knit and stretch over precipices. Knotty invites us to interact and tells us that regardless of whether we realize it or not, the world feels our presence and reacts to us. Let us think about the soft future and share ideas about what is could look like. About the future constructed from interwoven threads, instead of stacked up blocks.
Imagine knitted future
with us 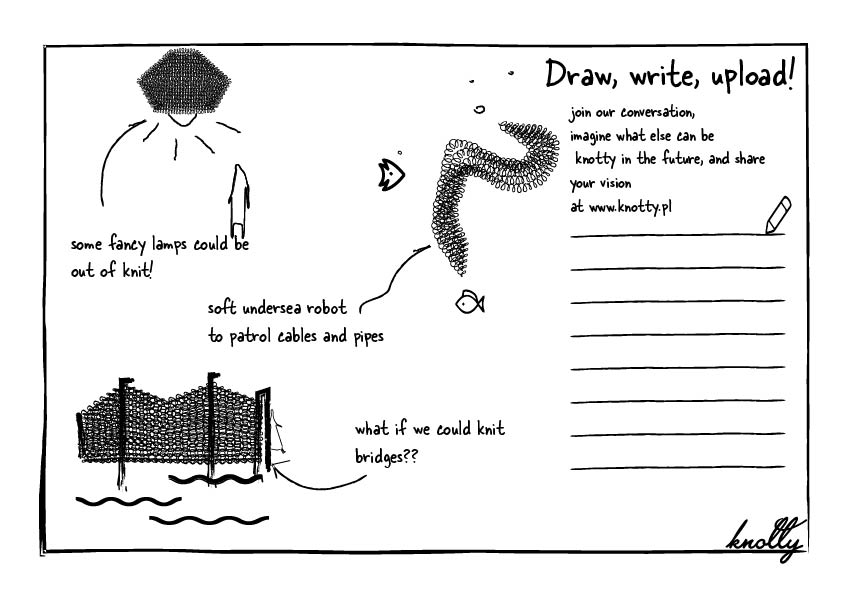 Knotty was developed as a final bachelor project of
Paweł Lasota and Magda Mojsiejuk
at Industrial Design, School of Form
Poznań, Poland
​2017